>unlcutter your life, free your mind

>Friends of mine who see this migh laugh. Yes I have to admit to being something of a hoarder. I have been collecting books for many many years and then there is the DVD’s, the magazines and the knick knacks.

But even for me there was a point that it was simply getting too much. I would be looking around my rooms and just thinking I want more space! It was time to take some action.

Then the hard part starts, you look around your rooms and see all the stuff you have accumilated over the years and think:… where in heaven’s name am I going to start! For a lot of people the clearing out stops right there. They are motivated but not enough to take that first hurdle and just start. Don’t worry too much, you are at the beginning of the road and you will make the start when you are ready. 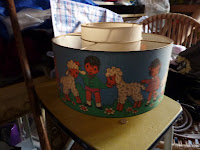 The second hurdle arrives when you come across stuff that has sentimental value. These can be the most meaningless items for other people. I kept the old lampshade that was in my first kiddie room because I just could not imagine throwing it out with the trash. But it did keep staring at me from my cupboard everytime I opened it. It was starting to irritate me big time. I had to let it go, and what helped me do it was to take pictures. So here it is in all it’s glory just before going into the bin.


Another hard part for me was that in the beginning I would carry 10 big binbags full of junk out of the house and I would see absolutely no progress. The room was just as cluttered as a week ago. Why had I done all the work? all the anguish and the muscle ache? Believe me stick with it and it will get better. Eventually you will see the empty spaces appearing on the ground, on the shelves and in your cupboards.


The most difficult thing for me to clear away is books. Yes I think I am officially addicted so of course until recently I kept every book I had even bought in my life. Several things have helped me in clearing out books.

What also motivates me is that I have promised myself a tablet pc when it is all done. Some junk is worthless and needs to go immediatly. But some other stuff can fetch a price on the internet or a local car boot sale. This helps me to keep going on moments that I start to waver and might give in and stop. I visualise my reward.

And when you are finished you will have a house with space again. And what is even better you will find there is more space in your head, more peace. People do feel better in an uncluttered house. Why not give it a try.