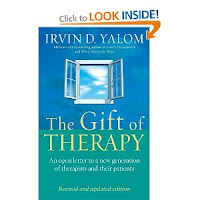 Irvin Yalom‘s books inspired me long before I became a counsellor. I think I picked up the first book I read by him during the mid nineties. And since then I have read most of his books.


One that really struck a cord was “The gift of therapy” which I have reread a couple of times since buying it several years ago. In this book Yalom shares some of his wisdom with therapists who are just starting out.


The great thing about this book is that it shows the therapist as a human being with faults and worries of his own. I like how he writes about himself and dares to be vulnerable. 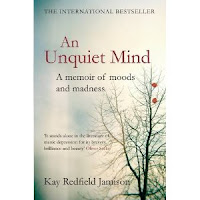 There is always the debate of how much therapists should share with clients. Should they share if there is something going on in their life? Should they tell a client if they have been through something similar as the client is facing right now? That is an ever ongoing debate. As I work with client groups who are going through the same thing I have gone through [being highly sensitive & living with chronic pain] I do share when it comes to those areas. Also because it is relevant to therapy. But there is a fine line between not sharing enough and sharing too much about your private life and one that we always have to keep in mind.


And yet I am an admirer of the kinds of books written by therapist who do share some of their lives with us. Another great favoriet of mine is “The unquiet mind” written by Kay Redfield Jamison in which a psychiatrist openly talks about her own struggle with being manic depressive.


I think that if a therapist is at ease with what has happened in his or her life and worked through it and found balance it can often be a great bonus when this is used in therapy. As long as she is always critical of why she is sharing certain info with clients and to make sure that is has value.