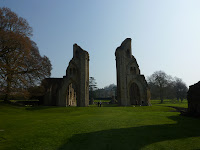 Do you know that feeling? Some places are just magical? I do wonder if that works the same for everyone. I do not consider myself a highly spiritual person. I have some interest in the field and use some in my work, but at the same time have my feet planted firmly on the ground. And yet there are some places on this earth that can really touch me and draw me back to visit them time and time again.

For me Glastonbury in England is such a place.  The first I heard of it as a child was through my fascination with the King Arthur stories. I knew I wanted to visit, but there were so many places on my to do list and Glastonbury certainly did not stand out. When I was 21 I had my first change to visit, I was on my own for the first time on an abroad trip and it took some organising to get there by public transport.It was around sundown when I saw the Tor looming up in front of me through the window for the first time in my life. It gripped me and since has never let go. Every time I come down the Somerset country roads my heart skips a beat when I see the Tor again after years of absence. 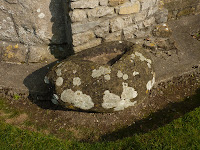 Usually the abbey is the first stop. The biggest car park is right behind it and it is an easy first stop. There are only a  few walls left of what must once have been one of the biggest abbeys in the kingdom. What is left still impresses wether you are christian, pagan or non-believer. There just is something about the place. Like many christian places Glastonbury abbey also has it’s pagan symbols. There is the egg stone behind the abbey kitchen. The legend goes that women who sit on the stone will get pregnant. No, I have not tried that. 🙂  But it is a magical belief that has lasted for centuries. Another legend is of course that King Arthur himself was buried on abbey grounds. And centuries ago they did find the bones of a large warrior and a woman besides him. Then there is the thorn.  The holy thorn that blossoms at Christmas. This is an offshoot of the one on Wearyall hill that was so unfortunately damaged by vandals last year. All these stories make for a magical athmosphere. Do I believe in them? It doesn’t matter, walking around surrounded by so much magic makes me feel good. 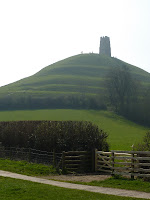 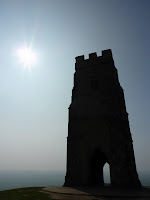 Next is the Tor. A hill next to the small town, crowned by a small tower. Several footpaths lead up the hill. I have taken most of them. Running, walking and nearly crawling to the top. Once you are there you have a magnificent view of the surrounding countryside. Andit is as if you can feel the energy under your feet. On the top I will sit or stand quietly for a while doing grounding excersises. Taking in new fresh energy and letting go of old and excess energy. And even after the long hike I will feel  rejuvinated. 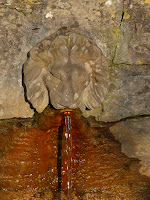 The trek down seems so much easier and I know that at the end awaits the chalice well garden. This is the final stop on the tour that is never missed. The garden offers tranquility and the healing waters of the chalice well. It is a haven to sit, rest your feet, put them in the healing water or drink from it [upstream] and just relax. Even at times that relaxing was not a strong point, I always could in this garden.

Too soon the day is at an end again and I say goodbye knowing I will return again and do my little trek all over. I feel energized, peacefull and happy.


Are there places on earth that do this for you?  I would love to hear from you and please share your story here or on facebook.