>Book review :Me and my pain

A little while ago I was looking around a website that sold cheaper e-books. A friend had given me this tip. The website is called smashwords and indeed it has lower priced and even free e-books in many categories and e-book formats. While I was filling in the keywords that interrest me, I came across the following book.
“Me and my pain – the challenges of living with chronic pain” by Abbey Strauss. As it was only 2$ and it seemed pretty interresting I decided to download it and give it a try.

I must say those were 2$ well spend. This book really focusses on one of the challenges of living with pain. And that is the challenge of making people [especially doctors] believe in our pain. With so many of us you don’t see on the outside that we are almost always in pain. And medical tests can’t find a reason for the pain. How often have you heard “Maybe it is more a mental problem”, seen in doctor’s eyes that they don’t really believe you. In this book is advocated for doctors and patients to be honest to each other and to believe in one another. Pain that is not understood and not acknowledged can drive people to suicide. Patients can feel they have tried anything and nobody understands what is going on.

The sections on addiction are really strong. A lot of pain patients are wronly labeled addicts because they take a lot of painkillers to get through the day. He explains very well that this is not the case. If the pain would go away so would the painkillers.

I found the following section of the book very striking. 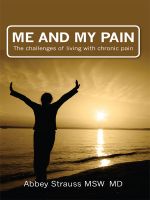 it’;this must be done with the same enthusiasm, gusto and
savoir-faireof someone getting used to being poor.
Painpatients can’t answer ‘how are you?’
with‘fine’; for to say ‘fine’ is thought to mean that they are
better.
Painpatients can’t choose to sacrifice; if
theyever do something one day because of the emotional joy of
doingit despite the pain penalty payable afterwards, then they
can’tobviously be in that much pain.
Painpatients have to perfect; I guess that
meansthey can’t be human.
I don’t think the situation here in Europe when it comes to getting the right medication is as bad as it is in the US. But still I found this very striking.
All in all I thought the book was a bit too long and there was a bit of repetition and the examples of people in trouble about getting the right medication went on and on. But in the end it was a very usefull book. It strongly advocates the rights of pain patients to be believed and to be helped! Every person has the right to the best life they can lead. For me that means pain patients have the right to medication they truly need and help from therapists to help them get the most out of life under difficult circumstances.