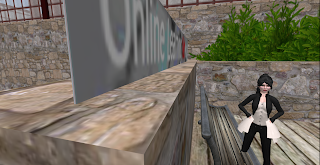 One of the great things of the internet, you can attend a conference without leaving your own home. Last week there was a virtual conference taking place in second life, organised by counselor education in second life. I had been in there once before, but to say that I know a lot about it would be an overstatement. That is why I took some time during the days before to make a new avatar and to make sure that I at least had the skills to make her sit down. But in case I totally sucked I had the backup of onlineventswho were going to show the whole conference few of charge. The great thing was also that their chatroom was integrated into the chatroom of the conference.

Let me give an overview of some of the lectures I attended, it will give you a bit of an idea of what was discussed.

Wednesday:
I attended the opening session and I must say I was very busy watching what other avatars looked like etc and amazed at the technology of second life.

Keynote session: sexualized Role Play in Second Lie and Beyond.
I was a bit surprised that the conference opened with a discussion on a topic like this. But soon I was watching and found myself imagining the benefits this might have for counsellors working with sexual issues in clients. So much is possible in SL. You can make your avatar very life like. 🙂 And to use this in issues, make it vivid so to speak, yes I can see the benefits in that.

Counseling in Genderland
As this is still a controversial topic, I was very interrested to hear this lecture. I have not worked with Transgendered clients myself, but I firmly believe that there are people who were born in the ‘wrong’ body. And that they are entitled to care and the possibility to change bodies. SL can help in this process. Before trying to live as the other gender in real life, they could safely practice the other gender role in SL and get a feel for it already.

Demonstrating Cyberculture through Film: Life 2.0.
We started with watching the trailer for this movie. It does show some of the drawbacks of SL. The people who get into it too much and forget their first life. How healthy is it to be in SL more than 18 hours a day? Is it adultery to have a cyber affair on SL? all interresting questions for a counsellor. The cases of internet addictions will only grow in the future and how many of us are prepared for that? Do we run the risk of addiction ourselves when we work on the computer and also do our research there? How would you help couples with relationship issues if you don’t know about cyberculture? So much to think about. 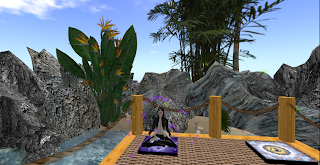 On thursday morning there would be a tai-chi session, I was interresting to watch that, as I did not think my avatar could manage it. But I could not find the location. Instead I did find the meditation area and tried a little bit of that.


Competencies in Addressing the Christian Client’s Worldview.
This morning there were some technological problems. It wasn’t until halfway through the lecturetime that the sound came back. That shows that even with many experts in one room, technology can still let us down. That is why it is important to have backups when working online with clients. Make sure there is an emergency telephone number you can reach each other on, so one of you is not left hanging and waiting what is going on.
The lecture had to be cut very short and it lost some because of that.

CACREP goes international with IRCEP: the international registry of counselor education programs.
Very interresting to hear that there is now some movement to come to international counselling standarts. IRCEP will try to do that and counselling institutions from all over the world can apply. Right now there is such a difference between counselling education all over the world, in some countries it means a masters degree, in other countries you can call yourself a counsellor without any training again. Which makes it important for the client to check a counsellor’s education before starting work with them.

So the conference gave me a lot to think about. I like the medium that Second Life is. I can see a lot of possibilities to use it in counselling. But before I could ever contemplate that I would have to get a lot more familiar with it. And find out how secure it is. Can it be encrypted so the client’s anonymity can be guaranteed.


I would love to get feedback about what other people think about SL and counselling.